For the past 14 months or so, Canadians have spent more “quality” time in their homes and on their digital devices than ever before. This has led to a renewed focus on, well, a whole bunch of previously unexplored topics and trends. Among the strangest of these is the mysterious case of the hardening butter. Sometime in late January 2021, the topic of ‘hard butter’ began circulating and then trending on Canadian social media, eventually spreading to the USA and around the world. At the heart of the issue were anecdotal accounts that butter in Canada was harder than it used to be. Left on the counter overnight, butter was reported to be the same consistency as if it had come straight out of the fridge. Toast lovers across the nation reported carpal tunnel-like symptoms as they attempted to spread their favourite pat. Bakers were up in arms and aprons. The colour was off. It had a strange glow. One woman thought she heard the butter speak to her. Canadian butter had taken on a life of its own, somewhere between foodstuff and super-villain. To understand this issue from a dairy production perspective, it’s essential to first understand what butter is and how it’s produced.

According to the Butter Journal, butter is one of humankind’s most enduring foodstuffs. In ancient Rome, it was taken for coughs or spread on aching joints. In India, Hindus have been offering tins of clarified butter, called ghee, to Lord Krishna for the better part of 3,000 years. And in the Bible, butter is a food for celebration, first mentioned when Abraham and Sarah offer three visiting angels a feast of meat, milk — and butter! The essential butter-making process is as old as it is simple: separate the cream from cow’s milk, then ‘churn’ or shake it up. The remaining liquid, when drained off, is buttermilk, while the solid mass when washed and then shaped, is butter. Today, commercial butter is made in large, modern plants. Continuous butter manufacturing machines have replaced churns. Typically butter is made from pasteurized milk to enhance product safety, and salt and colouring may be added. All in all, modern plants and production practices ensure a consistent supply of safe and nutritious product. As there have been no major shifts in butter production technology in the recent past, we have to look beyond processing for a theory to explain what, if anything, could be making our butter harder. To help answer the question, I spoke to dairy expert and genetic solution manager for Semex, Mark Carson.

Pointing A finger at Palm Oil

Chiefly implicated in the hardening butter saga is an ingredient used in some dairy rations – palm oil. Dairy Farmers of Canada indicates that palm oil is never added to Canadian milk or butter. However, a related compound, palm fat, is occasionally used as a supplement in the rations that some Canadian dairy farmers feed their cows. Could palm fat be the butter-hardening culprit? According to Carson, the connection between palm fat and hard butter is tenuous at best. First, only a portion of Canadian dairy farmers even use palm fat in their feed rations. And those that do, tend only to use it some of the time — it is relatively expensive compared to other fat sources. Furthermore, on operations where palm fat is utilized, it tends to be over the summer months, not in winter when hard butter was first flagged. Carson adds, “In Canada, milk is picked up from a number of farms and pooled before being delivered for processing. Because individual producers use proprietary feed blends, it is highly unlikely that any single ingredient could cause differences in processed products like butter.” In other words, since no two farms are producing milk in exactly the same way, it is extremely doubtful that any variable component, such as palm fat, could cause changes in product quality, appearance, or texture. He further explains that there are no other factors he’s aware of that would have caused butter to exhibit increased hardness over the past few months. “There are no genetic factors in modern dairy cattle that would lead to an end product difference like hard butter,” says Carson. “We are certainly breeding cattle for better longevity, increased production, and selecting for certain key components like protein and fat content in the milk. But nothing that would change the appearance or texture of a further processed product like butter.”

According to Carson, a better explanation for the focus on hard butter lies far away from the barn — it’s social media. Buttergate seems to have started when Canadian cookbook author Julie Van Rosendaal posed a question on Twitter: "Have you noticed it's no longer soft at room temperature?" Whether through genuine interest or sheer boredom, the topic was picked up by foodies, researchers, and consumers alike. A Google search on the term “buttergate” delivers almost 400,000 results, so the issue is clearly of interest to many. Carson believes that the “echo chamber” effect took over during the pandemic, with minute and often arcane thoughts and talking points blowing up almost overnight. Like Carson, I believe interest in buttergate has already softened and will likely lose any remaining steam as soon as the next topic of interest or controversy starts to populate the foodie Twitterverse. In six months, the whole thing will most likely have blown over — another short-lived, pandemic-related blip in the news cycle. Canadian dairy farmers and processors produce an abundance of wholesome, safe and nutritious products that are the envy of the world. And because raw milk comes from individual family farm businesses, each with its own management practices, there will be occasional differences in colour, texture, or even taste with processed products like butter, cheese, and yogurt. Like craft spirits and artisanal food, every tankerful of milk is both consistent yet somehow unique. In my opinion, this is something to be celebrated, not feared. I give the final word on the topic to the folks at Dairy Distillery, makers of the Vodkow line of products, who fake-launched Vodkow hard butter on April 1: 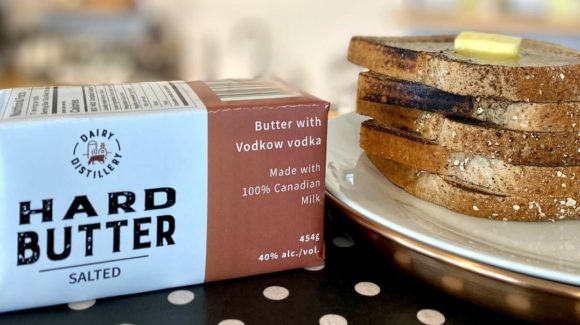 “Is the thought of palm oil in your butter stressing you out? We’ve got just what you need. Introducing Dairy Distillery Hard Butter. Fresh Canadian butter churned with our Vodkow vodka. Turn your morning slice of toast into a shot of vodka. At 40% alcohol by volume, our butter is guaranteed to be soft. Get your Hard Butter now at our distillery. Please butter responsibly.” What a fitting tribute to this hard issue! This is Part 2 of our special report on buttergate. If you missed Part 1, written by Nourish President Jo-Ann McArthur, you can find it here.